by Webmaster Jean Luc Ferrand on 7 March 2018 in Furniture

In 1908, Maison Charles is born thanks to Ernest Charles that takes over the Maison ULLMANN, bronzier. The company only uses bronze and first specialize itself in the former lightings reproduction, an activity that allows it to build a strong reputation among art bronziers. 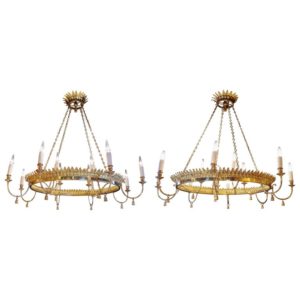 All craftsmen joining Maison Charles are graduated from the most prestigious Art schools such as the two Ernest CHARLES’ son entering in the company in 1959. Jean, valedictorian from the Boulle School and Jacques, graduated from Applied Arts. Their arrival brings a fresh renewal in the Maison CHARLES creation that develops her true characteristic style, between classicism and uniqueness with the most famous and desired, still today : PINEAPPLE, EAR OF CORN, PINE CONE, etc.

In 1972, Chrystiane CHARLES, Jean’spouse and Gilt medal from Beaux-Art in sculpture, take over the artistic direction of the Maison CHARLES and create the Collection that wears her name. She proposes a set of sculptural lamps, signed and numerated, inspired by the Nature : AMARYLLIS, TRADE WIND, ORCHID, TULIP…
Several Crystiane CHARLES creation are recognized and rewarded by a Creation Gold Lamp of the International Salon of the Lightings of Paris. In 1997, Chrystiane CHARLES receive the distinction of Knight of the French National Order of Merit

In 1984, Maison CHARLES is welcomed inside the Colbert Committee that gathers the most famous French art worker companies, confirming the reputation and the quality of the Maison.

In the years 2000, the company get through difficult times with a creation breathlessness and money issues. A young investor, Micheal Wagner, former of the Hermès Pantin workshops, acquired the company. He becomes the new Maison CHARLES director and revitalize it. Maison CHARLES moves and settles in the former Christofle’s workshops, in Saint-Denis. This acquisition was salutary because it permits to save the company that has today a perennial activity.

Today, the company is specialized on custom made pieces for private clients, art galleries or interior designers as well as limited sets of the Maison CHARLES’ best sellers.