A chintz, equivalent of the French word « Indian », is inspired by Indian « palampores » (or palempores) from the Hindi « palang », meaning « bed » and Persian « push » meaning « to cover » ; it’s a large cotton canvas, printed with ornamental motifs, mostly flowered. 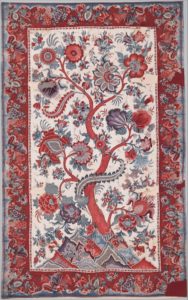 Palampores arrived to Occident through the East India Companies of the greatest naval powers in Europe or by the eastern trade routes. If it’s exported from Indian for Occidental markets in the 18th century, the strong demand from customers led to the opening of numerous factories throughout the European continent, more particularly in France and in Switzerland.

These printed cotton canvas created in the style of Indian palampores are more commonly called, in the 18th century, “Indian” in France and chintz in English speaking countries. One of the most famous Manufactories of chintzes is the French Oberkampf Manufactory, settled in Jouy-en-Josas, not far from Paris. It’s more convenient to study the evolving of the French chintzes, more known than Italian ones, called under the name mezzaro (or mezzari in plural). Let’s focus on them ! 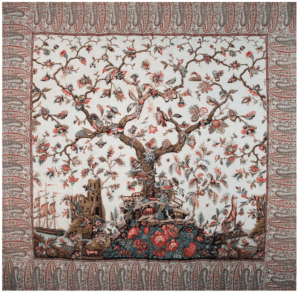 Chintzes production increases in Europe, not only in France and is well represented by the Swiss Giovanni et Michele Speich. They opened a Manufacture, also called Speich, near Geneva, at Corigliano in 1787. Geneva was a strategic place, considerate as the “Swiss port”; water presence and quality of the Polvecera river was a major reason to choose this place for mezzari production; other manufactories came too.
Speich Manufacture was one of the most important of the 18th century, it was managed by Speich son-in-law, Luigi Testori, a highly skilled colors chemistry that opened a few years later his own factory; Speich Manufacture mezzari production lasts until 1872.

The «mezzaro» or «mesere» or even «mesero» (probably from the old Arabic word “mizar”, meaning «to cover») is a chintz,  large cotton canvas, varying in size between 252 and 275 cm in length and 230 and 256 cm in width, stamped in Genoese factories with pear, walnut or linden wooden stamps. These stamps could even exceed the number of eighty to decorate a single mezzaro !
This stamping technique, using wooden stamps, was known and probably created in Italia at the 14th century. It was re-used again because of the mezzari stamping and continues until the 19th century despite the competing with the copper plate 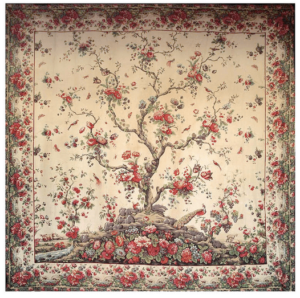 Many studies published over the last eighty years define the categories and the dating of mezzari based on the motif in the lower left corner of the canvas: «mezzaro of the old tree» 1, «mezzaro of the boat», «mezzaro of the minaret», etc., dated between the end of the 18th and the 19th century.

The mezzaro presented here belongs to the «small cows» («a vacchette») type, characteristic of the Speich Manufacture production and dated to the mid-nineteenth century.
At the centre of the composition is the tree of life emerging from a hill. A symbol already used in ancient Mesopotamia, the tree was conceived as a link of the three parts of the universe: the subsoil, dominated by magic forces, where its roots descend; the surface of the earth, the kingdom of men, where the stem grows and develops; the sky, the place of the divine, towards which the foliage surpasses. At the base of the tree is a squirrel (symbol of foresight and attention) and a peacock (symbol of immortality) which rests on a branch of vine curved by the clusters and the flowers. On the sides a stag, goats and cows. All kinds of birds and butterflies fly among the flowering branches of peonies, daisies and roses. The whole in a freshness of tones and red and rose colors still very well preserved. 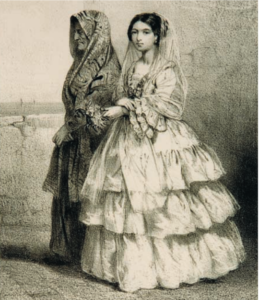 Posters and writings of this period furnish proof that mezzari were fashionable and used as a veil: «Women go on by foot in summer and winter covering their heads, shoulders and arms with a veil called mezzaro, which does not allow them to be recognized 2».

Mezzaro was characteristic of popular costume, like in Genoa where it was, during a long time, a main part of the women outfits. It was sometimes cut to create other clothes, different from a veil, and it’s a real part of the Italian textile history. He was also present in interior decorations; its use gradually disappears in the end of the 19th century.

At the beginning of the French production, a same fascination for India and the Elsewhere. This love for chintzes became so important in France that a 1686 decree, perfectly fitting with the protectionism logic of the King Louis XIV, forbid chintzes imports and copies production on the French territory to trying to protect, a bit, French weavers. The forbidding is officially stopped in 1759 3 and, a year later, the Oberkampf Manufactory is created; many will open at the same time in the whole country 4.
Like in Italia, chintzes became an entire part of the traditional costume and everyday outfit, and also a part of the interior decoration of wealthy people 5.

It’s interesting to compare motifs of French and Italian chintzes / mezzari : today, we are mostly associating Jouy Canvas, and more widely, French chintzes, to lovely bucolic scenes Truth is that between 1760 and 1830, most of the French chintzes was adorned with floral stamped motifs with wooden stamps…as the Italian mezzari 6 !
Only after, French chintzes were best evocated by bucolic decor, linked to 18th century Rococo painting.  This scenes were intrinsically linked to galantes paintings and pastorals and chintzes were created using major artwork of the most famous artists of this kind, like Antoine Watteau, François Boucher or Jean-Honoré Fragonard. Amazing artists, like the painter Jean-Baptiste Huet 7were hired and worked directly for Oberkampf Manufacture.

Jouy canvas inspired motif are still visible today in our interiors, on the bedding pieces or some clothes: it’s the marker of a main trend in the 18th and 19th centuries. These motifs and colors are witnesses of a special time in the French decorative arts history, but also of the Europeans one because they invite us to discover Italian productions and traditions, more confidential.

↑3 This article must be short so we are missing space to give more detail about this forbidding was bypassed more or less notably or by English chintzes copies smuggled or by chintzes produced by the Mulhouse Manufatcory Koechlin Schmaltzer Dollfus & Cie, created in 1746. At this period, Mulhouse Republic was independent and no concern by the French forbidding.

↑4 Main chintzes production center in France are, except Oberkampf Manufacture of Jouy-en-Josas, Nantes, Alsace and Marseille.

↑5 Decline begins circa 1830. Ironically, it’s the industrialization of mass tamping, increasing the chintzes production, that destroy it. Chintzes are to numerous on the market, they lose their confidential aspect and became less desirable then outdated. Manufactories closed, and Oberkampf in Jouy-en-Josas is one of the latest to close in 1843. Assimilated to the poor taste for years, chintzes return to grace in the early 20th century.

↑7 Jean-Baptiste Huet (1745-1811) is certainly the painter whom collaborate the most to the Oberkampf Manufactory success with his drawings. Student of the animal painter Charles Dagomer, he is received at the Royal Academy in 1769 and collaborates for 25 years with Oberkampf Manufacture to the creation of fine bucolic and vegetal models for chintzes.